The selection of all schools was Identification by Department of Education (DoE). The main focus is to assist schools around the Nkangala Region including Bronkhospruit as aligned with the national agenda, that of providing sanitary towels for needy girls. On average, a girl child has the possibility of losing close to 86 days of schooling through the lack of sanitary towels, thus many resorts‟ to utilising “Toilet Rolls” as an alternative measure. This in many cases has left many girls uncomfortable as incidents have let them to be ridiculed by peers and classmates alike in an event of many accidents that comes with utilising such measures.

The project kick-started in March 2017 with the first municipality being Victor Khanye, formerly Delmas and proceeded to all the municipalities of Nkangala District Municipality.

Mr Timothy Khumalo, who is the Deputy Director of Corporate Services at Witbank Hospital, cited that the hospital had been established in 1910 and had been operating at the Nedbank Centre before it had moved to the current structure in 1925. The hospital had 36 beds at the time, but due to the fast growth of the population in the Witbank area, this necessitated the expansion of the hospital. Currently, the hospital is operating with 350 beds, with 16 registered staff  members. One of the most critical challenges previously encountered at the hospital was limited water supply. This posed a risk to the patients because they had limited access to clean water and were exposed to poor sanitation. These dynamics contributed to the entire hospital being environmentally noncompliant.

The hospital submitted its request through Vitrovian Trading Projects, outlining all its needs – however, prioritising water supply. PDNA, a contractor at Kusile Power Station Project, intervened by providing a 2 720 mm high, 9 385 mm diameter bolted water tank holding 180 m³. The main objective of the tank is to provide reasonable spare water capacity to the hospital in the event of both timed and untimed water supply interruptions. The excess water storage tank capacity is 180 m³ and will supply the whole hospital with at least three days of spare capacity water in the event of an interruption.

Kusile Power Station Project and its contractor have exceeded our expectations, and we would like to take this opportunity to encourage other organisations to also submit their requests to Vitrovian, so that Kusile Power Station can also assist them with challenges with which they are faced, said Mr Khumalo. 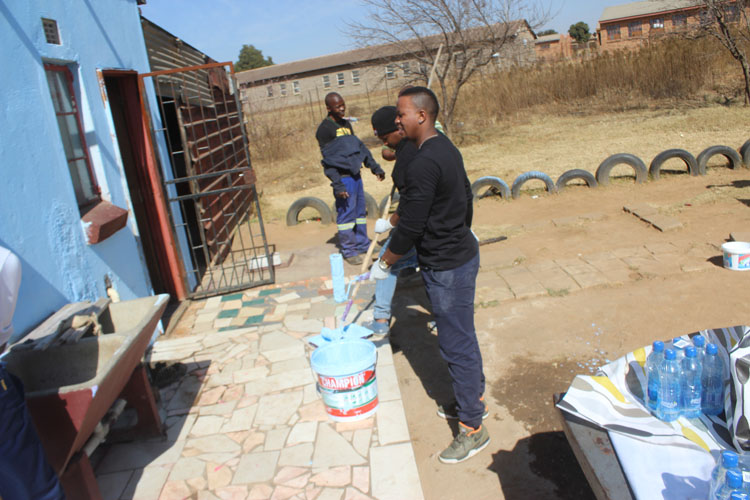 Thembalethu Disabled Children’s Centre is based in Witbank. A need was identified to purchase stimulation toys for the learners. Most of the learners cannot move on their own; therefore, musical toys would be appropriate for them. Only toys were delivered at this centre.

In support of HIV/Aids orphans, Hitachi Power Systems Africa donated an amount of R25 000 to the well-being of the orphans residing at the Gayela Imbokodo Centre in Phola.

WBHO contractor renovated a soup kitchen for the Middelburg Home Base Centre for orphans located in Steve Tswete Municipality.

Eyethu Disabled Centre is located in Victor Khanye Municipality in the Delmas area. This centre accommodates 20 mentally disabled people from ages 18 years to 59 years. The centre has had a number of safety challenges before the intervention of WBHO contractor, which erected a fence around the centre. In addition to the fence, the contractor also donated office furniture, a fridge, and a kitchen cupboard to the centre.

In Victor Khanye in the Delmas area, there was a clinic that operated on the second floor of a building, thus making it impossible for disabled and elderly people to access health care. Stefanutti Stocks, a contractor from Kusile, intervened by relocating the clinic from the second floor to the ground floor to make it easily accessible.